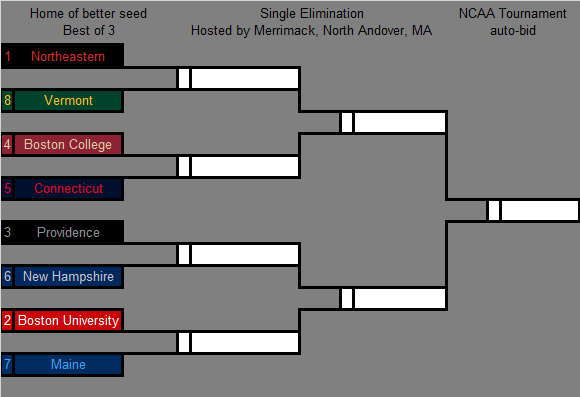 Hockey East was wild, as usual, with any one of the teams that finished 3rd through 5th capable of finishing in any of those spots depending on results on the very last day.  Had Connecticut prevailed in their final game against BU, they would be the third seed and BC would be hosting Providence.

It think what I take away from this the most is how much Boston College feasted on the two teams that didn’t make the tournament.  Also how far ahead Northeastern is in pretty much every category.  And the goaltending was pretty good across the board, except for, you know, Vermont.

I thought the Catamounts might be able to take some points off the Huskies, or at least get a game to overtime in the later series, especially with it being in Vermont, but Northeastern just got better and better.

The Catamounts outshot the Huskies in one game and were even in another.  That’s actually not that surprising as Vermont was a solid possession team over the course of the season with a 28.9-23.2 average per game or 55.5% of the shots taken.  Some of their competition was weak, but that number is +5.1% above their expected value given that competition.

This series will be about the Huskies’ shooters, namely Alina Mueller and Chloé Aurard and the Catamounts’ less than stellar goaltending.  Catamounts netminders combined for a .878 save percentage (note that my calculation does not count empty-net goals against goaltenders whereas CollegeHockeyStats.net appears to).  That was dead last in the NCAA, and it wasn’t close.  Second-to-last Post was .015 higher.  To put that into context, Catamounts goaltenders would need to save the next 109 shots just to tie for last with Post.

It will also be about whether the Catamounts can get to Frankel.  Even though Gwyneth Philips got time in the Huskies net in the final game, all four Catamount goals scored were against Frankel.  Only Maine, with 5, had more on the Huskies’ elite netminder.  (Providence had 4 overall also, but 1 against Philips.)

Northeastern – Tessa Ward,  The Northeastern forward doesn’t light up the scoresheet a lot with 5 goals and 7 assists, but she is a solid contributor on a penalty kill that ranks third in the nation.

Vermont – Sini Karjalainen.  Overshadowed by fellow defender and Vermont leading scorer Maude Poulin-Labelle, Karjalainen was a big part of the Catamounts being a tough out despite their goaltending.

Since starting the season 8-4-1 the Terriers are 16-2-3, a streak that coincides pretty closely with the return of Jesse Compher.  Maine was…not that, but with a somewhat bizarre 5-4-6 run, they banked enough points to distance themselves from eighth-seed Vermont and avoid playing Hockey East’s top seed (whom they did beat once).

I don’t really know what to make of this series.  BU played their best game against the Black Bears early in the season, without Compher, then proceeded to be taken to overtime twice.  The Terriers took a 2-0 lead in game 2, only to allow two third-period goals before netting the OT winner.  In game 3 Maine raced out to a 3-0 lead 7:04 into the first with BU eventually equalizing partway through the third.

There wasn’t an inordinate number of power play goals, or power plays themselves to blame for the weirdness.  BU just…didn’t play Maine very well.

The non-Aerin Frankel Hockey East goaltenders never seemed to get enough credit this season, and Schroeder and Jackson were excellent.  We all have this image in our head of BU as an offensive powerhouse, probably thanks to Marie-Philip Poulin from a few seasons back, but the Terriers were stout defensively, allowing just 1.56 goals per game behind Schroeder’s .944 save percentage.  Maine wasn’t quite as good, but still allowed just 2.12 goals per game behind Jackson’s .930.

I’m sorry but I watch a ton of college hockey and my mind just blanks when it comes to these two teams playing each other.  Add Providence to the list of teams that had a quietly good, but not great season.  Star forward Maureen Murphy only made 11 games.  Had she not (presumably) been injured, Providence likely would have given BU a more serious challenge for second in the conference.

Your classic team that likes to get into high-shooting games vs. team that doesn’t.  Providence had the third-fewest combined shots in their games with 52.9 total, 29.0 for and 23.9 against.  New Hampshire flirted with 60 overall, just missing at 30.6-28.9.

New Hampshire won out in terms of play this series, getting their fair share of shots on goal, unfortunately the actual goals didn’t come with.

Providence – Lauren DeBlois.  The freshman defender finished third on the team overall and second among defenders with a 6-16-22 stat line but was overshadowed by forward Sara Hjalmarsson and defender Whitney Dove.

New Hampshire – Ava Boutilier.  The junior goaltender was really good with a .940 save percentage that rose to .942 in conference games.

BC probably wishes they would have gotten New Hampshire…oh wait they lost twice to the Wildcats too.  Or Maine…hmm they were 1-1-1 there.  Oddly they were 2-1-0 against Providence which puts them in with BU and Maine (?!?) as the only teams to sneak two wins off the Friars.

UConn had a season that looked good at times on paper but they just couldn’t gain any momentum or a signature win.  They were 0-6-0 against Northeastern and Boston University but cleaned up pretty well against everyone else.

What it always seems to be when BC plays UConn, regardless of who is in net – a lot of BC shots and not a lot of BC goals.  Connecticut goaltender Morgan Fisher had a sub-average season with a .910 save percentage, but it was .920 in conference and she sure showed up against the Eagles.  Maddy McArthur and Kelly Pickreign weren’t exactly bad either in this series.

Boston College – Alexie Guay.  Guay is overshadowed by Cayla Barnes on the back end but the freshman defender potted 3 goals and picked up 16 assists to go with.

Connecticut – Morgan Wabick.  Natalie Snodgrass and company on the top line did most of the heavy lifting in terms of scoring but Wabick was fifth on the team with 6 goals and 11 assists.