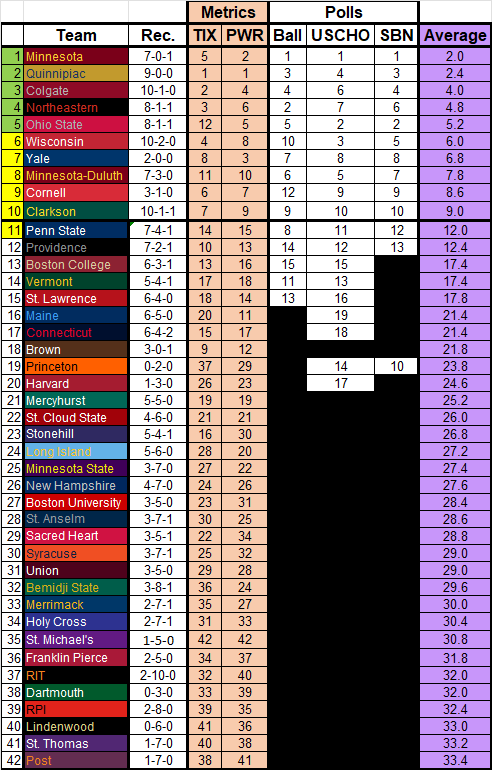 Minnesota – Maybe we shouldn’t be so surprised but after a lackluster end to last season — a 2-1 NCAA Quarterfinals loss to Minnesota-Duluth — other teams had become more in vogue. But the Gophers have wrecked absolutely everyone, including 11-0 and 9-4 wins over a Minnesota State team that otherwise hasn’t looked bad. Their recent 1-0-1 with a shootout win weekend against Ohio State cemented their top status.

Wisconsin – Wisconsin opened the season against Penn State and got blown off the ice 4-1. Shots were only 28-24 Wisconsin, and in a third period where they trailed the entire time, and by 2 for about 14 minutes, Wisconsin could only muster an even 7-7 shots tally. Wisconsin beat Penn State 9-1 the next night, anchored by 6 goals in a third period they entered already up 3-1. From what I’ve been told, Wisconsin played their top lines deep into the blowout — Jesse Compher and Sophie Shirley scored the Badgers’ 8th and 9th goals — and Penn State did not. Wisconsin beat Lindenwood 6-0 to open the next weekend, outshooting the Lions 72-3, but at that point it just felt like they were still trying to prove something after their opener.

Penn State – The Nittany Lions have an unimpressive record and numbers, but they opened the season with a series against then #2 Wisconsin and a game against #4 Minnesota Duluth. They also played a close series against Colgate, who was #6 at the time, but has slid upwards in the rankings since. They’ve looked like a team scratching at the bottom of the top ten and may well find themselves there when the season is done.

Brown – Brown is a bit of an enigma. They opened the season with a draw against rookie team Stonehill (for what it’s worth, shots were 46-15 Brown), then swept their first weekend of ECAC play with 2-1 wins over Dartmouth and Harvard, the latter in overtime. They got 32 shots against the Crimson too, though they also allowed 45. Brown feels like a decent team that needs a goal scorer or two.

Princeton – Princeton came into the season with high aspirations, especially with the post-Olympic return of superstar Sarah Fillier. Opening against Colgate and Cornell, one of the tougher ECAC weekends, was a bit cruel. It might be a bit early to hit the panic button, especially considering that; Princeton outshot both teams, and they entered the third period only down 2-1 to Colgate and tied with Cornell. Colgate had multiple games played already and Cornell an additional series so it’s perhaps not surprising they were able to outlast the Tigers.

Stonehill – The first-year Skyhawks currently lead NEWHA, and while that is partially a product of who they’ve played (Post and St. Michael’s each twice) and some other NEWHA teams having played fewer games, it’s impressive nonetheless. They beat Franklin Pierce 4-1 in their first meeting, and made the Ravens look bad.

Union – Far from the Dutchwomen teams that went 6 years without a conference win… They split with New Hampshire, beat Boston University, and were 0.6 seconds from taking St. Lawrence to overtime. The Dutchwomen are averaging 28.1 shots per game and allowing 34.3, not good, but their best differential ever.

St. Michael’s and Post – I talked about this on Twitter, but the Purple Knights and Eagles are about a goal per game better in goal differential than last season and about 10 shots better in that category. These are still the two bottom teams in NEWHA, but there’s a good chance one or both win a game against someone other than each other.